Inside a greenhouse that will fit atop most Singapore buildings, the company has built a vertical vegetable farm fertilized by a fish tank that uses no pesticides, insecticides or chemicals, and produces seven times more vegetables using less water per square foot than a regular soil farm. 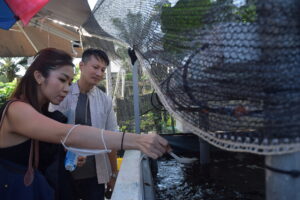 “We have circular production,” said James Yin, who co-founded V-Plus Agritech with Nelson Tan and William Foo. “We are able to efficiently use energy, water, as well as waste. We see waste as a resource.”

By using aquaponics —a combination of hydroponics and aquaculture —the fish in a tank below the vertically grown crops produce waste, which is processed into nutrients for the herbs and vegetables. The water is recycled between the fish tank and the plants, meaning the technique may one day be suitable for desert farming.

“Our water usage is just 10% of a ‘normal’ farm,” Tan said. “In soil farming, water actually sinks into the ground and it’s lost.” Tan estimates their yield is seven times that of traditional farming.

The fish can also be sold. The farm has both a tank with 1,200 tilapia and is conducting an experiment with the National University of Singapore with a higher-value fish, the omega 3-packed Australian jade perch.

While the green vegetables sell out at the farmers markets, the firm’s main source of revenue is consulting, particularly for schools and urban areas looking to incorporate vertical farming modules.

“Most importantly, it’s about the data,” Tan said, because it allows them to “troubleshoot in real-time.”

“You have a professor, you have a furniture businessman and you have an ex-soldier over here. … Had we been farmers from the start, this would never have happened, because if we had grown up in a farming community, our thinking would be using soil. What microbes? What IoT? It’s out of our heads. The thing is, the future of farming is likely people who are not farmers,” Yin said. “If we can turn something that is based on experience into a science based on data, anybody can farm.” 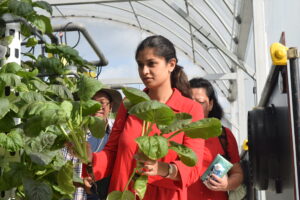 Where it’s harder to compete with soil farms is the cost.

“They are the cheapest, infrastructure-wise,” Tan said. “We cannot compete with imported, cheap vegetables.”

To counter this, they seek clients who prioritize sustainability.

“We are actually targeting a lot of the Western markets because governments have signed the Paris accord. The farmers themselves are looking for new, alternative ways that could help them be greener farms, so there’s a potential for a large market over there, and also for our modular system, we have a vision of bringing this to places that has harsh conditions,” even deserts, Tan said.

They said they’ve been contacted by people in Finland, France, the U.S., New Zealand and South Africa about their farming methods.

They also plan to introduce robots.

“Automation is going to help us make a farm more profitable. With our new design, which is in the prototyping stage right now, harvesting and the cleaning will be automated,” he said.

Yin estimates they’ll need to get 10 to 15 times bigger to be competitive in Singapore, which will depend on continued government support to help scale the technologies to help achieve the goal of 30% food independence.

“Food tops the global supply chain emissions … so by growing hyperlocal, we reduce the carbon emissions,” Yin said. Solar panels, he added, will bring them full circle and “further decarbonize the food production.”

V-Plus Agritech announced in July a partnership with Brite Solar, which makes “agrivoltaics,” solar panels that are not opaque, thus enabling crops to be grown under them.

“You can grow crops and produce energy at the same time,” Yin said. “For crops requiring more light, like grapes, [you need] 80%, 90% light transmittance. And this allows a lot of light to go through. And then for crops that require less light like raspberry and blueberries, they can use less light.”